Motorcycle fuel injection systems are of 2 major types: open loop and closed loop. In closed loop, there is an O2 sensor in the exhaust port which feeds combustion values to the ECU, which then adjusts the fuel injection values to keep the engine combustion process near the stoichiometric air/fuel ratio, given by the chemical equation for combustion of a fuel in air. The chemically correct stoichiometric ratio for gasoline is 14.7:1 (14.7 times as much air as fuel, by weight). In open loop, there is no O2 sensor feedback to the ECU.

EJK sells tuners for many motorcycle models. Their tuners are open loop and load-based. The EJK controller uses Load Based Technology which sets it apart from most of the competition. Most EFI controllers use what is called 'Alpha-N' Tuning Technology. Alpha-N tuning is associated with just using Throttle Position (TPS) and RPM as the factors to make tuning adjustments. Load Based Technology differs by using Rate, TPS and RPM as the key factors for adjustment. Load Based tuning allows a user to tune their vehicle for every gear and for all riding conditions. From EJK KEY FEATURES

This topic is covered in Chapter 4 of the Honda CRF250F Service Manual. I will cover a few brief points here.

You can read out and clear the DTC using an MCS ($2400 at HelmInc, $1200 on eBay) or the relatively cheap SCS short connector ($20 at BikeBandit, Partzilla, Amazon, eBay). 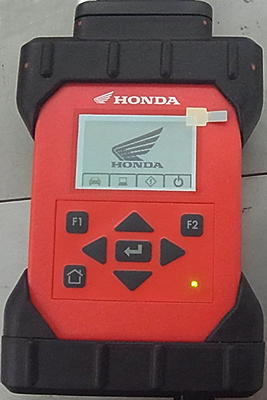 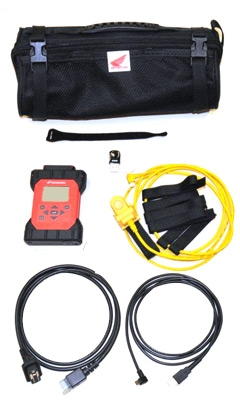 The MCS and in kit form.

The MCS is a meter or handheld computer that allows the service tech to readout the DTC, the freeze data, other current data, and the ECM condition. Most riders will not own one of these, nor have access to one.

I went for the SCS short connector. It's nothing more than a female connector with a jumper wire installed which allows you to connect two pins in the DLC. You could do this with a short piece of wire, but be careful you don't short out anything else in there; the DLC has four pins inside it. You could also look for the female connector in an electronics supply store and add your own jumper - probably in the $5 range.

Essentially, you plug the SCS short connector into the DLC, then read codes from the MIL. The MIL blinks two numbers that indicate the DTC, and you refer to a table in the manual for instructions on what to do.

All of this information is covered in great detail in Chapter 4 of the Service Manual, 32 pages in all.

So what kind of open loop tuner is on the CRF250F and what can it do to adjust for riding conditions such as temperature, air density (elevation), and humidity. This next part is conjecture on my part; I wasn't on the CRF250F design team.

A look at the sensors can yield some clues.

BA sensor - Bank Angle sensor The BA sensor does nothing for tuning; it's there to shut the engine off if the bike falls down. Actually, the specs show that if the lean angle is 60 degrees or more, the engine will shut down.
No help here with tuning based on riding conditions.

CKP sensor - Crankshaft Position sensor The CKP sensor is the master timing clock for the whole bike. The sensor sends out a pulse every time the crankshaft completes a revolution, and at a particular time in that revolution. The ECM uses this timing pulse to insure that events happen at the time they are supposed to happen. Although this sensor is important, it doesn't vary to a measurable degree when riding conditions change.

EOT sensor - Engine Oil Temperature sensor The EOT sensor tells the ECM if the engine is cold or hot. The test procedure in the Service Manual only tests for a threshold value for voltage and resistance. This is consistent with cold and hot start conditions, and not an engine shutdown or warning if the engine overheats. Cold and hot starts are not riding conditions, so no help here.

IAT sensor - Intake Air Temperature sensor At last, something that changes as riding conditions change. It would be a good idea for the ECM to lean/richen fuel as temperatures rise/drop. But temperature is of lesser significance than elevation when considering riding conditions. This is good, as far as it goes.

Here is what wikipedia has to say: Engines that use a MAP sensor are typically fuel injected. The manifold absolute pressure sensor provides instantaneous manifold pressure information to the engine's electronic control unit (ECU). The data is used to calculate air density and determine the engine's air mass flow rate, which in turn determines the required fuel metering for optimum combustion (see stoichiometry) and influence the advance or retard of ignition timing. A fuel-injected engine may alternatively use a mass airflow sensor (MAF sensor) to detect the intake airflow. A typical naturally aspirated engine configuration employs one or the other, whereas forced induction engines typically use both; a MAF sensor on the intake tract pre-turbo and a MAP sensor on the charge pipe leading to the throttle body.

Sounds to me like this sensor is the absolute indicator of important riding conditions as far as fuel injection is concerned.

TP sensor - Throttle Position sensor The throttle position sensor tells the ECM how much you've turned the throttle, and thus how much fuel to inject. No help here with tuning based on riding conditions.

And that's it as far as sensors.