Modifications are shown below in roughly the order I did them.

I live in Salida, a small town in central Colorado. I do most of my shopping online. I do not endorse nor disparage any vendor or parts they sell. I buy parts, install them, and report any features and/or problems I find. There are certainly many vendors that I have not encountered - Google is your friend.

About that number. I weigh bikes using a WalMart scale I bought 20 years ago. I don't use the scale in the house; it's strictly used to weigh things in the garage, so it gets very little use. I check its accuracy now and then by weighing myself at Dr appointments, and then coming home and see how close my scale is to the Dr's scale. It's usually within a pound or two. 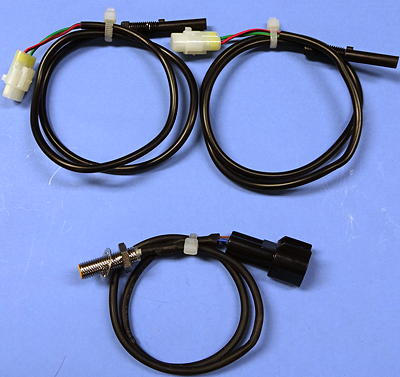 I read in several forum posts that shutting off the motor like this is not desirable, and that ICE bike riders often overlap braking with acceleration and were the most probable beneficiaries of this mod. Seems like a good idea, so off they came.

The lower wire is the sidestand/kickstand interlock wire. This wire tells the controller when the side stand is down, and the controller shuts off the motor for the duration of the down-event.

Again, I read in several forums that when you ride through water, this switch could be affected and the motor would be turned off. I ride in water now and then, so off with the wire. 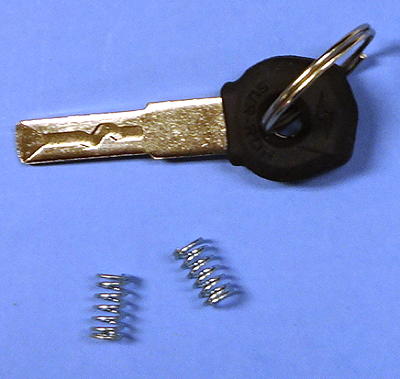 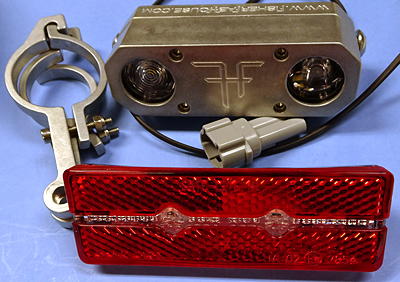 I don't ride at night, so the lights are gone for now. 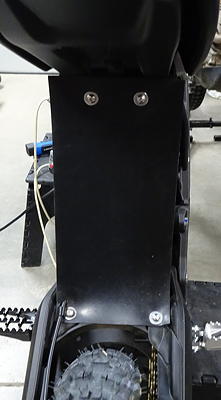 The shock is hangin out in the breeze, so I added a rubber protector. It is made from extremely durable weather and chemical resistant EDPM rubber, and bolts into place with existing bolts/holes. 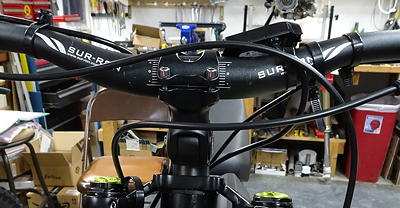 The handlebar riser brings the handlebar up to a more comfortable position. This one raises the handlebar 35mm and moves it forward xxmm, making for a roomier cockpit. The mounting is sturdy and the part seems very robust. 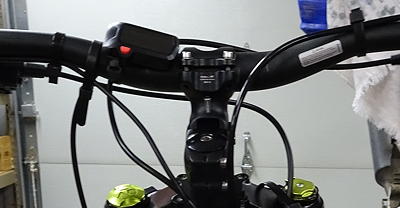 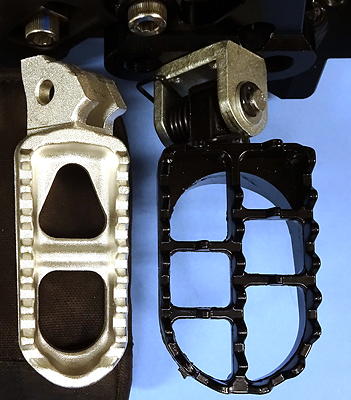 I suffer from instep fatigue when I ride for longer than about 5 hours. I use ortho inserts in my riding boots, but that doesn't completely solve the problem. Some time ago, I discovered that larger footpegs provided a great deal of relief. These aftermarket aluminum footpegs (black) are wider front-to-back than the stock aluminum footpegs. 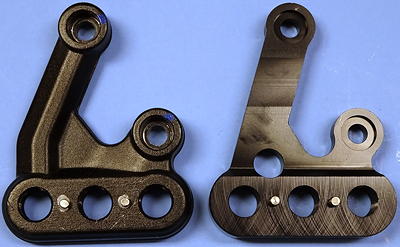 While replacing the footpegs, I also replaced the cast footpeg mounts with machined 7075 aluminum mounts.

While replacing the footpeg mounts, I did not reinstall the sidestand.

The seat must be removed when replacing the rear fender. The nuts to be unscrewed are hidden under a plastic cover on the underside of the seat. There is a very difficult and convoluted way to remove and replace this plastic cover as described on several forums and the seat install instruction sheet, but I elected to do the job differently.

First, remove the seat sub-frame from the main frame. Unscrew 4 bolts, and off it comes. 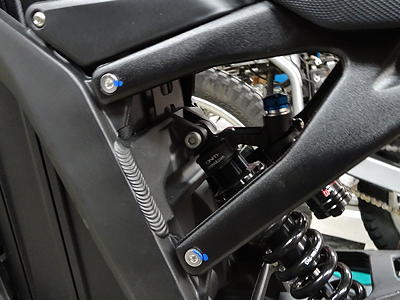 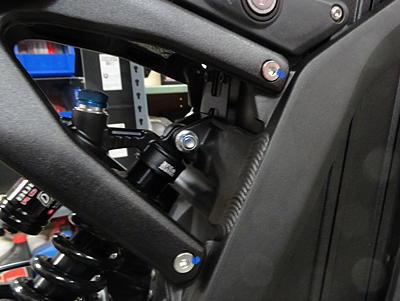 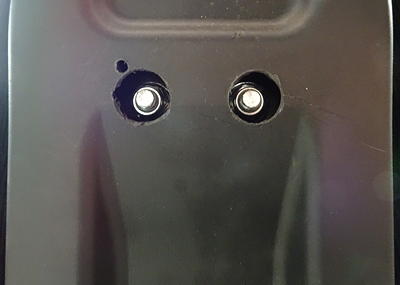 The front nuts and washers can be removed with some difficulty using a ratchet box-end wrench. There is an opening at the front of the seat underside where they can be accessed. 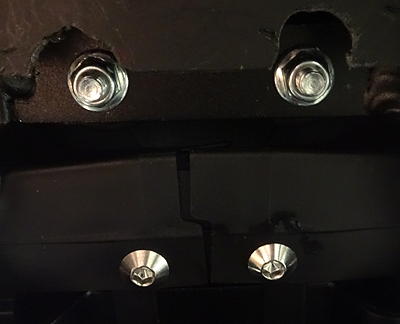 After the seat was removed, I used a soldering iron to cut out arcs in the plastic seat base so I could access the nuts with my ratchet.

This view is looking up at the seat bottom. As the seat is lowered into place on a right-side-up XBike, the plastic lip with the cutouts drops down behind a cross piece, and the bolts enter the holes. Access to the bolts/nuts is then through the cut-outs.

If putting the washers on with the nuts is too difficult, I think you could leave the washers off with no problems. The nuts are lockers, and should be OK without the washers.

I removed the redundant taillight wire while I was performing the above process. 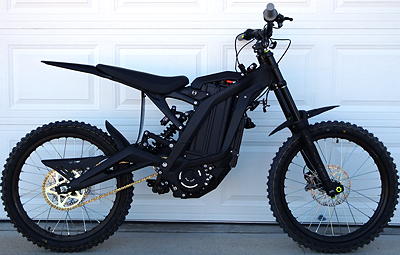 The Kaniwaba Powered Pedal kit arrived, and I had a quick look at the parts. Most excellent. I plan to install this kit next spring after I actually start riding my XBike.

The stock skidplate is metal (stainless steel?), but I prefer plastic/HDPE, and when it became available, I ordered the HDPE skidplate.

The new HDPE skidplate is shown on the left in both pictures below. 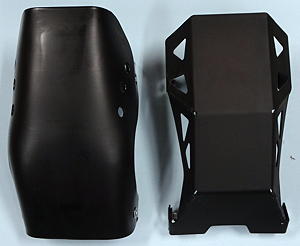 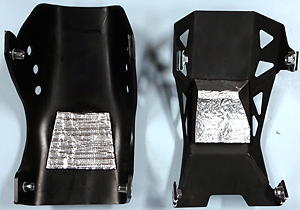 The installation instructions that came with the skidplate note that installing the mounting bolts should be done in a certain order, and screwing in the bolts only a few turns by hand lead me to believe that I had to use caution doing the install. Sure enough, getting the last bolt in proved to be very difficult. I managed, but it took quite some time and effort. The bolt is very hard to align with the threads, cross-threading for a dozen or so times before I got it right. I used a trick to get everything lined up... 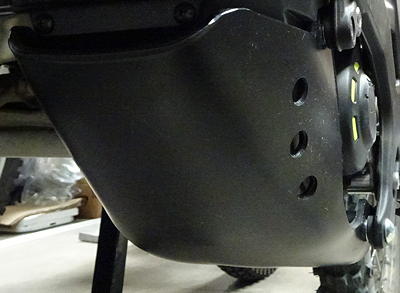 I found a better rear mud guard, made of HDPE plastic, and installed it in lieu of the hard, but fragile, plastic stock rear mud guard. Easy peasy install; 2 bolts and washers swapped for short stockers. 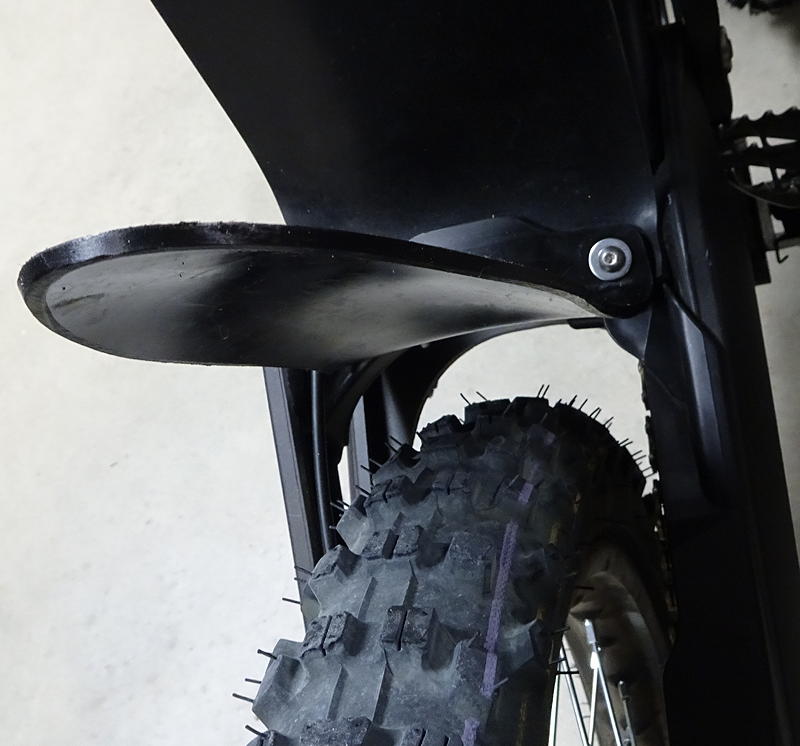 I found some funky hand guards, and decided to give them a try. They are the most minimalist hand guards I've ever seen. I installed the left side only, to check fit, interference, and looks. I'll do a few rides before putting the other side on (or remove this one if that's the final decision). 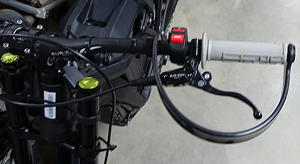 Race Spec Sur-Ron makes a seat that fits over the stock seat. The new seat provides more room to move forward and backward, and the extra height adds to riding comfort. Two straps hold the seat in place. The seat bottom is molded in the shape of the stock seat, and is a tight fit on it, so there is NO movement that I could detect. 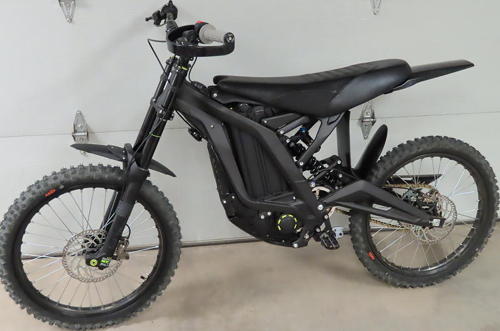 Although limited to snowy streets and paved routes, the test rider pronounced the seat a positive improvement. The next ride will be on dirt, so I'll find out how it performs under duress. 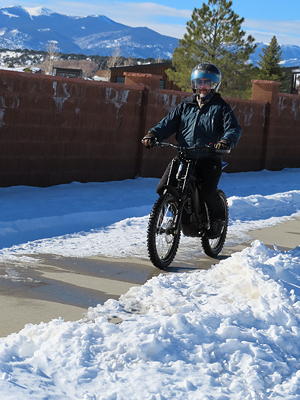 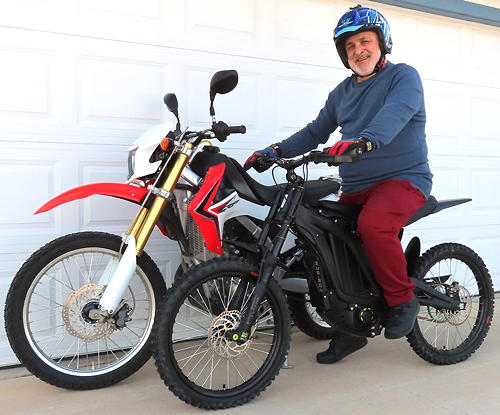 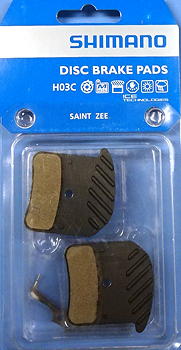 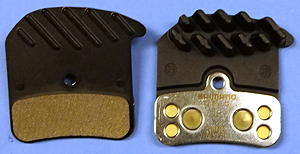