The purpose of this web page is to provide riders with information to mix-n-match various US XR250R and XR250L carbs and parts. Note that UK and AUS carbs may be similar, but as far as I know, the bikes are road versions and some have electric start. Other countries around the world have a dizzying variety of XR models/carbs. I will be discussing the US carbs only.

US carbs come in 49-state and California (CA) versions and some carbs come in one version only. I will not specifically address the CA versions. The primary difference between the two versions is jetting.

Honda was surprisingly consistent using a distinct carb for each Gen 4, Gen 5, and L bike group, as shown below.
PD05, PDG1, and PD79 carbs come in variations determined by jetting component differences.

I have decided to use data from only one carb from each group - the first carb in each group. Subsequent carbs generally have minor changes, mostly jets, and otherwise maintain the same configuration.

86-95 are not available from Honda dealers.

91-96 are not available from Honda dealers.


Some carbs are available from aftermarket vendors, on eBay, and from private parties.

I have never had the opportunity to hold all 3 carb models in my hands at one time, but I have held each of them at one time or another. I first thought about comparing them when I bought my 1991 XR250L and began to study that bike's carb to see if I could improve it's performance using XRR jetting parts. I was able to physically compare the XRL carb to my 86 XR250R carb and make decisions about parts swapping. As I create this web page, I have NONE of the three carb models available, so I will resort to parts fiche and old notes.

Belay that last remark. Friends have seen to it that I have physical samples of the carbs I'm describing; I will be posting many carb pictures with explanations and observations. Stay tuned.... 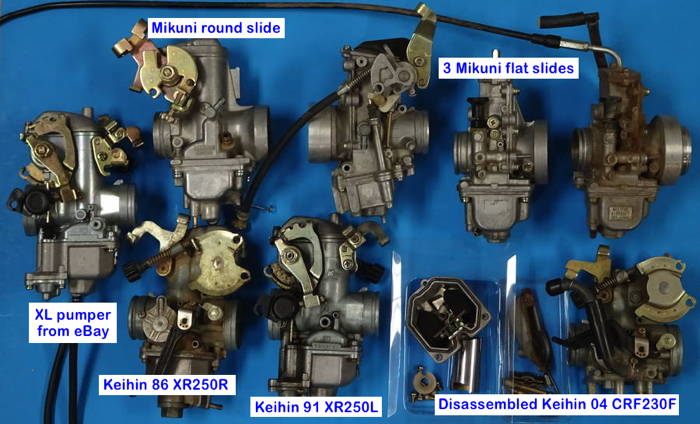 DISCUSS choke, AP, inlet, outlet, length, height, width.
Jets are chosen by vendors, and are not necessarily the sizes you should use. Jetting is dependent on riding elevation, temperature, humidity, and the state of engine tune (performance modifications). 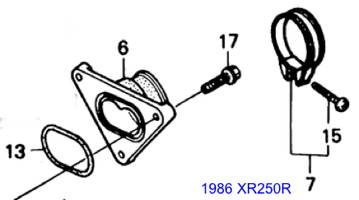 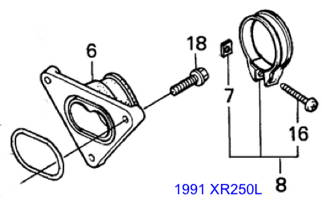 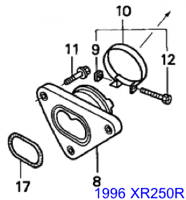 The first item of note is the carb insulator, which connects the carb to the cylinder head: it is identical between all three carbs.
The o-rings are identical, also.

The mounting bolts differ, as well as the metal bands and bolts.

The evidence suggests that the three carb models have identical fronts. All three are PD variants, and this supports the conclusion.

Honda part numbers are shown in the table below. 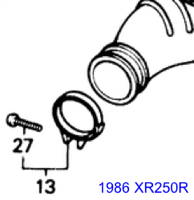 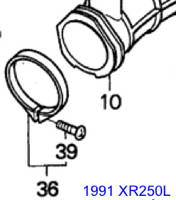 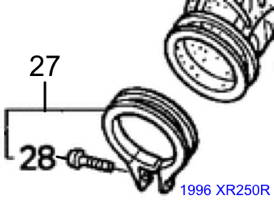 Honda part numbers for parts shown above are listed in the table.

Honda groups some carb parts into sets; other parts are listed individually. These sets make do as rebuild/repair kits. I show the Gasket Sets for the three carbs of interest. 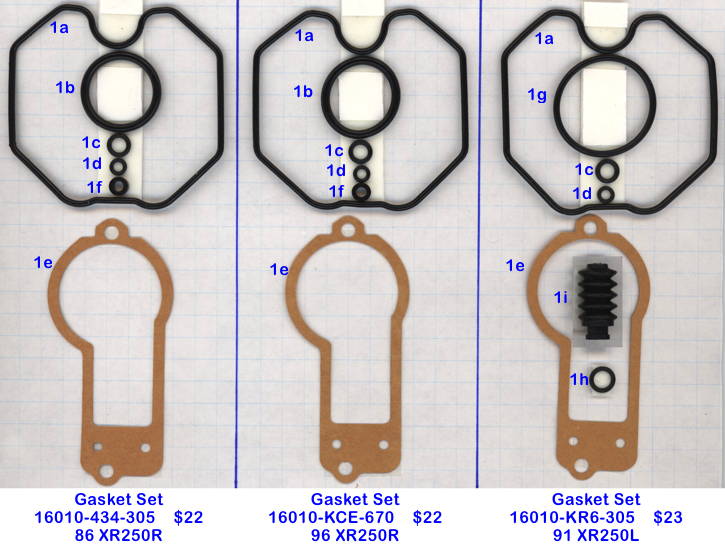 The parts are keyed to these tables ↓ and the fiche shown in the aftermarket kits section below.

The XR250R carb Gasket Sets are identical; the XR250L carb Gasket Set differs slightly due to the accelerator pump and the absence of a float bowl bottom bolt and air cut-off. You can see a list of the other sets by looking at the comprehensive master spreadsheet near the bottom of the web page.

There are several vendors who offer carb repair or carb rebuild kits at prices substantially less than the corresponding Honda OEM sets and parts. These kits are actually an aggregation of several Honda OEM sets into one package. A few Honda OEM parts are not represented in the aftermarket kits.

These kits are similar to each other, differing in regards to the accelerator pump etc just as the OEM Gasket Sets differ.

Most parts in these kits are of acceptable quality, with the notable exception of the fuel screws, needles, main jets, and pilot jets. The fuel screws are identical to the early OEM fuel screws, and they are really too short. A longer aftermarket fuel screw is much better. I did not measure the needles to compare them to the OEM needles. They are a very light weight brass or alloy and I don't trust them; I prefer OEM needles. The same goes for the jets; I prefer OEM Keihin jets, available from Honda dealers or JetsRUs.

The aftermarket parts in the Shindy rebuild kit (left picture just below) are keyed to stock Honda parts shown in the table and fiche. The parts break-out shows parts in each Honda set. Honda does not uniquely number each part in a set, but I have numbered these parts so they can be located on the fiche. 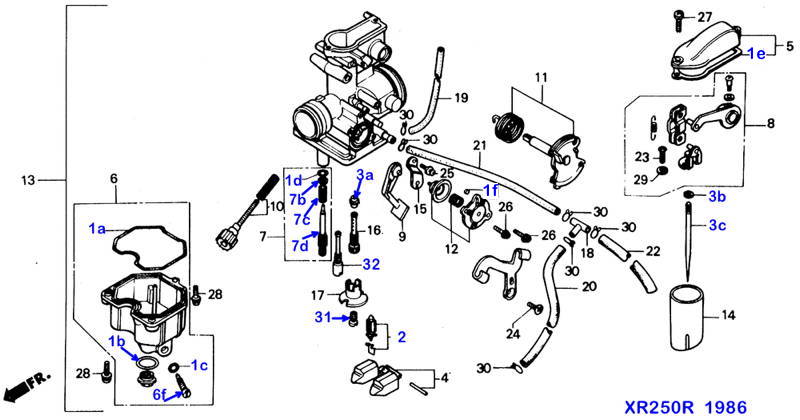 The aftermarket parts in the Shindy rebuild kit (left picture just below) are keyed to stock Honda parts shown in the table and fiche. The parts break-out shows parts in each Honda set. Honda does not uniquely number each part in a set, but I have numbered these parts so they can be located on the fiche.

The aftermarket parts in the Keyster rebuild kit (left picture just below) are keyed to stock Honda parts shown in the table and fiche below. The parts break-out shows parts in each Honda set. Honda does not uniquely number each part in a set, but I have numbered these parts so they can be located on the fiche. 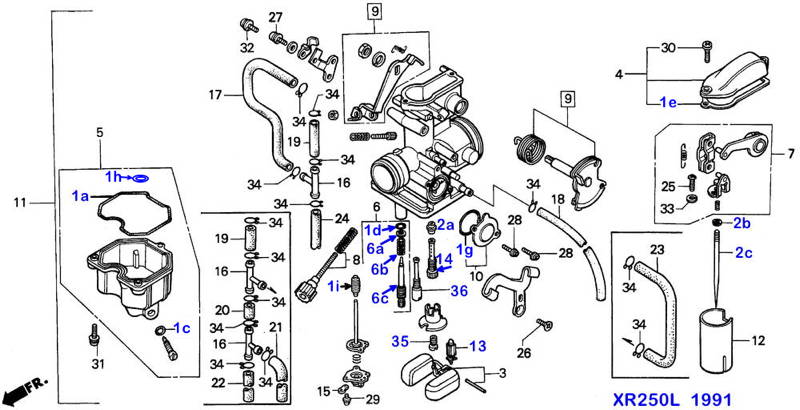 A picture of all three rebuild kits showing all parts at a glance so differences can be easily seen. 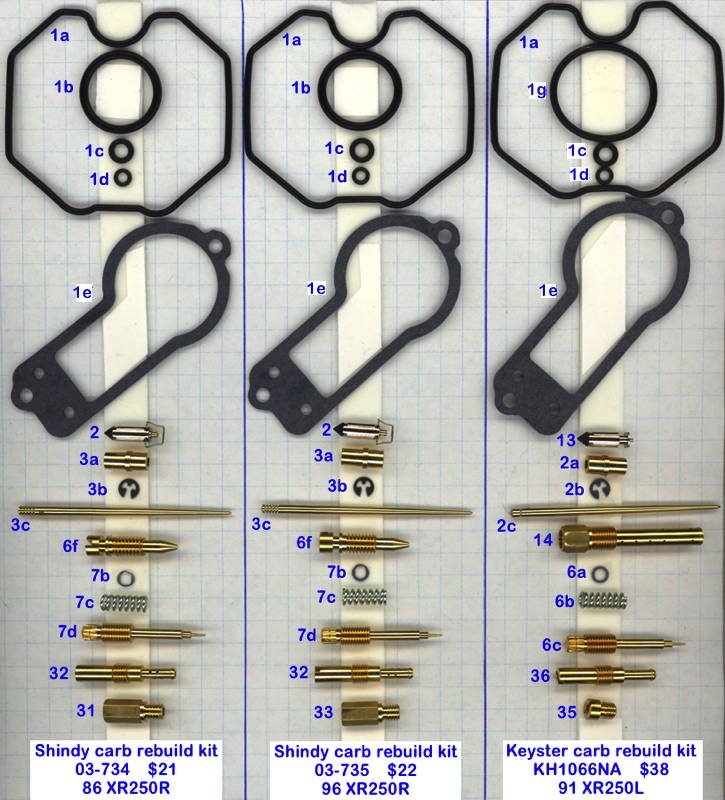 The similarities between kits, with the notable exception of the accelerator pump on the 250L, indicates how interchangeable these carbs and their parts are.

When I modified the carb on my XR250L, I wrote:

The accelerator pump carb on the XR-L looks like it has potential. Pumper carbs can be jetted to get rid of that nasty four-stroke hesitation on the bottom and give good power on top too. However, the non-pumper carb from the XR is ultimately a better performer because it is designed for more air/gas flow. The needle and seat on the pumper carb are designed to make the bike EPA legal (lean) and are the biggest impediment to performance.

Where I wrote 'needle and seat' I should have written 'needle, fuel screw, main jet, and pilot jet' because these items collectively limit the carb's performance so it conforms to EPA standards. I suspect that changing the needle to an XR250R needle would provide a significant improvement in performance. Getting the jets correct for your riding elevation and setting the fuel screw for optimal off-idle pickup would be the final tuning steps necessary for best performance. Setting up the accelerator pump would be the icing on the cake. I actually think a correctly set up XR250L carb would be the perfect carb to install on 86-95 XR250R bikes.

I plan to set up a 250L carb for a local XR250R rider, and will post up results when they are available.

A picture of the master spreadsheet showing all carbs parts at a glance so differences can be easily detected. The lower case 'd' in columns D, H, and L indicate part number differences. Although there are instances where Honda has changed a part number and the new and old parts are actually the same, it's more often the case that different part numbers means different parts. 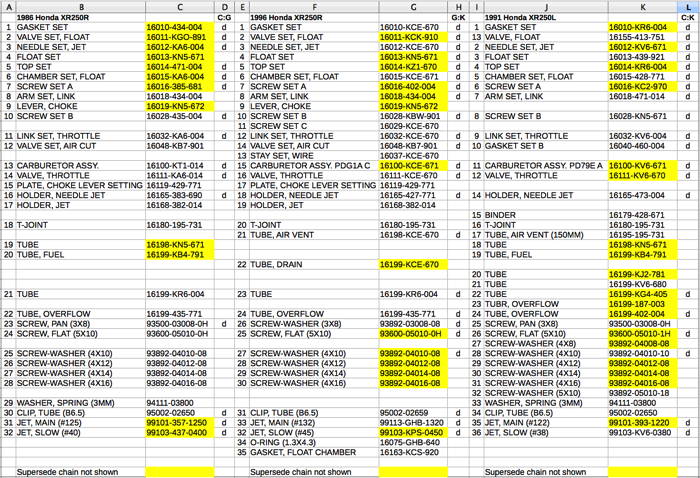 When the 1991 XR250L arrived, many of us saw it as a derivative and extension of the XR250R Gen 4 line that began with the long-stroke 1986 engine. As we delved into the XRL, we saw that it was just an XRR with street-legal additions (lights, horn, battery), and we knew the path from a street-legal XRL to a more dirt-oriented XRL could be facilitated by the simple replacement of XRL parts with aftermarket-improved XRR parts.

When the 1996 XR250R was studied, it was clear that it was a next-gen bike, and moving parts from this newer model to the XRL might not be so easy or productive.

All of this is to say that it is important to mention the YEAR and MODEL when talking about which parts crossover.