If you find any errors or would like to suggest changes, please let me know. My e-ddress is on my home page.    Click on small pictures to see bigger versions. 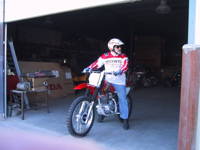 The 230F is similar in size to the older XR200R. The 230F seating position seems slightly roomier than the 200, and this may be due to the new flatter seat and narrow tank. The 230F seat is narrower than the old 200 seat, and there's no XR dip at the front. The foot pegs are wide and heavy-duty, unlike the 200's wimpy loops. The suspension is on the firm side, and neither forks nor shock has any external damping adjustment knobs or screws. The rear shock does have a pre-load adjuster. The shock is non-rebuildable. The fork caps are removable; there is a bolt head showing on the bottom of the fork sliders, so they look serviceable.

The 230F engine is actually 223cc, so it's not that much bigger than the 200 (195cc). The 230F engine seems stronger than the 200, but that may be due to its newness and my dim memory of the 200 performance. There is NO changeable oil filter. Instead, the 230F has an internal 'centrifugal filter' that spins oil contaminants out of the oil and collects them in an internal disk. You can clean this disk out when the engine side cover is removed. This design has been used by Honda since the 70s, and although it doesn't sound 'trick' or even well-engineered, it seems to work well. There is an oil strainer screen that comes out when you remove the oil drain plug, but it's not an oil filter. Note to the wise: change oil at the recommended 600 mile interval or sooner. 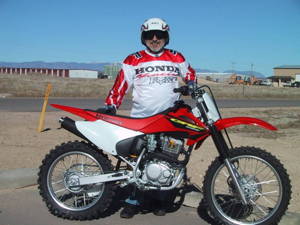 The exhaust is very quiet with the stock diffuser installed (rated 82 dba). With the diffuser removed, it is unacceptably noisy for trail riding. The tranny is a 6-speed, and the 230F comes with a 520 o-ring chain. The rear wheel is an 18 incher, so tire choice is better than you had with the 200's 17-inch tire. The 18 incher seems to get better traction than I remember from the 17 incher. There is a brief skid plate that only covers part of the front downtubes and none of the bottom frame rails.

The 230F is not water-cooled. It's an older design, air-cooled, single-overhead cam engine. If you take off the seat, tank, and side covers, you'll discover the 230F looks a lot like the older 200 in frame design, engine layout and design, and suspension components. The 230F has a few updates: electric start, front disk brake, slick-looking silencer, and beefier foot pegs, shifter, and brake pedal. Otherwise, this is not a new-generation 450R-type bike.

Although the 230F engine looks similar to the XR200R engine, the parts fiche reveals that they have very few parts in common. Some seals, o-rings, and small bolts are the same, but all other parts have entirely different part numbers, which probably means the parts are not the same. The 230F (and 150F) engines may derive from an ancient ancestor to the XR200R, but there is no mistaking that the engines are different. The same goes for the frame. The 230F frame is more robust than the XR200R frame.

My old 200 always was a little sensitive over the rough stuff; it would bounce around fiercely and was unstable when pushed hard. The 230F seems to track much better. I know it's heavier, but the stronger frame and better suspension add stability. The front disk brake adds confidence as well.

And now for the weight (drum roll, please)   233 lbs
ready to ride, no gas in the tank, one throttle cable was removed (the push cable).

This is curious because the service manual says it should weigh 237.2 lbs. I used a brand new bathroom scale from WalMart, so the number can't be that far off  ;-)

Cycle News had a review of the 150F and 230F on their web site. They said, "Overall, Honda has a couple of pretty neat bikes on its hands and is hoping that they'll be in your hands soon.   ... these two bikes are a blast to ride."

Dirt Bike magazine had an article in the December 02 issue describing the CRF150F and a few comments about the 230F. The 150F and 230F use the same frame, and the engine cases look very similar in the pictures. DB said the 150F and 230F are "of Brazilian descent". The model id tag on my 230F says: "Moto Honda da Amazonia Ltda. Made in Brazil", and there are no less than four yellow tags on the wiring harness that read "Sumidenso do Brasil". The Honda CRF230F service manual (from Helm Inc) is written in impeccable English - no Brazil references.

Dirt Bike magazine had an article in the January 03 issue describing the CRF230F in more detail and includes BBR frame info as well.

"When I first saw the pictures of both CRF150F and CRF230F, I noticed that the engine, at least externally, is very similar to the engine of my NX200 street bike. The (NX200) engine is good, but it has a design flaw; the engine will leak where the cylinder meets the head. Almost every (NX200) engine I have seen develops that leak after about 5 years, including mine, which leaks a lot, even after I replaced the metallic gasket a million times.

Rick's Note 4/21/07: I spoke with several friends who have Honda connections and they said the engine in the CRF230F is based on an older Brazilian model, but the version in the CRF230F has been updated to solve minor problems with the head and transmission. I suspect that the leaking gasket problem was fixed in the update process. My personal 230F has over 11,000 miles on it with no significant problems at all. I have replaced some service items, but major items like the engine/tranny have been stone reliable.

I clarified Tiago's quote above by adding (NX200) to show where he is referring to that engine.
Brazilian XR200R

Here's a hot version of the 230F selling in Belgium, the 230 Easy Enduro. This version is made by HM, which stands for Honda-Montesa, a company formed to market specialty trials bikes and which now also markets other Honda specialty models. Click here to see the Belgium HM web site. Click on "Easy" to see the three CRF230 models; Trail, Enduro, and Motard. Click on the thumbnails to see the different models. Note the Enduro and Motard models have rear disc brakes! The Enduro model looks like it has longer legs than the Trail model. Note - once you've clicked on all three thumbnails, clicking on them again in rapid succession switches the full-size picture quickly.

The front forks are shown as air-adjustable on Honda's web site and in the magazines. My Honda Service Manual and the bike itself do not show any air valves on the forks.

As I mentioned earlier, the actual weight in Colorado is 5 lbs less than the advertised weight (my error?).

Why did I buy this bike?

I currently own a KLX 307 (w/Stroker kit), which I use for serious trail riding (how serious can trail riding be? ;-) and an old XR250R, which I use to haul my chainsaw around for trail clearing. Why did I buy another, smaller displacement bike?

I like to explore old mines, cabins, and other historical sites, which are accessed via old, almost non-existent roads. Often these roads are rocky, overgrown with weeds, and partially washed out in places. A small, agile mount is what I need.

My KLX does not like slow-speed plonking; it's water-cooled and likes a lively pace to keep from overheating. My XR has a chainsaw pad on the back and is set up for hauling tools. I normally use it for exploring, but it's getting a little old ('88), and I guess the 230F is my hedge against the XR's eventual retirement. Besides, the 230F has 'brand new' appeal, a snazzy electric start, and fits my exploring needs. 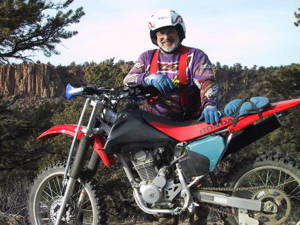 The 230F is actually a very good size for a teen (or older) starter bike or for a rider who just wants to plonk around rather than race (enduros or otherwise).

* Curb Weight - includes all standard equipment, required fluids and a full tank of fuel-ready to ride.