The tables show miles ridden and gas used to give MPG. Time and MPH are shown sometimes. Gearing, FI settings, and mods which directly affect engine performance and thus MPG are also shown.

This table is for the stock 250cc engine, plus mods as noted.

This table is for the modified 283cc engine, plus mods as noted.

Note: The EJK is still installed with the original numbers that were in it when I installed it. These numbers were supposed to work with the 283 kit and the stock muffler. My muffler has been de-catted, so it runs just a little freer than the stock muffler. I'll be attentive to the need for adjusting the EJK and report changes here and on the Big Bore page. So far, the EJK 'jetting' seems spot on.

This reference section will always be at the end of the Tuning page.

Chapter 4 describes how to read out and clear DTCs and how to reset the TP sensor. I show some selected information from the chapter to give you an idea of how to troubleshoot, but you should refer to the Service Manual for a complete discussion.

Other information I show here is taken from the "Fuel Injection System for Small Engines" write-up on the "Technology Close-up" web page where Honda describes PGM-FI as an emerging technology and standard for fuel injection on small-displacement engines (up to 250cc). 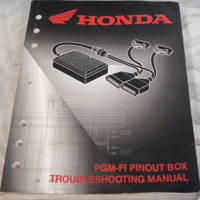 Here is an important list of abbreviations that is used throughout the literature I am referencing.

When the motorcycle has one of these symptoms, check the MIL blinking, refer to the MIL code index, and begin the appropriate troubleshooting procedure. If there are MIL blinking stored in the ECM memory, do the diagnostic procedure for the symptom, in sequence listed below, until you find the cause.

The DTC INDEX shows each Diagnostic Trouble Code, it's corresponding MIL blink rate(), a brief description of the failure, and a symptom/fail safe description. 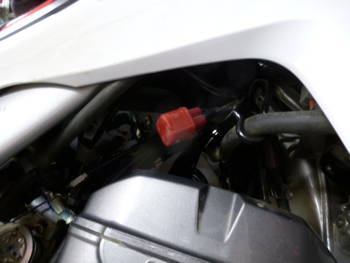 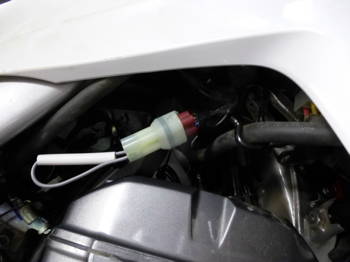 <--- DLC - Data Link Connector
Look under the right side radiator shroud. The DLC may be taped to a short section of the wiring harness in this area. Remove the tape. The connector cover is released by pulling the small tab outward then sliding the cover off.

With SCS connecter plugged in. --->

SCS connector - Service Check Short connector
You can read out and clear the DTCs using an expensive meter ($2400 at HelmInc, $1200 on eBay) or the relatively cheap SCS connector ($20). I went for the SCS connector. It's nothing more than a female connector with a jumper wire installed which allows you to connect two pins in the DLC. You could do this with a short piece of wire, but be careful you don't short out anything else in there; the DLC has four pins inside it. You could also look for the female connector in an electronics supply store and add your own jumper - probably in the $5 range.

DynoJet:
A typical production vehicle uses oxygen sensors that have a very narrow resolution. When you are cruising / idling (closed loop), the vehicle is concerned with maintaining an A/F ratio of 14.7 (stoich). When you put your foot on the floor and go into power enrichment (open loop), the factory sensors do not have enough resolution to tell you an exact A/F ratio. Any system that ties in to the factory oxygen sensors can only tell you if you are richer or leaner than 14.7. The Wide Band Commander, utilizing the Bosch LSU4 wideband sensor, will tell you exactly what A/F ratio you are running.

Oxygen sensor - from Wikipedia
When an internal combustion engine is under high load (e.g. wide open throttle), the output of the oxygen sensor is ignored, and the ECU automatically enriches the mixture to protect the engine, as misfires under load are much more likely to cause damage. This is referred to as an engine running in 'open-loop mode'. Any changes in the sensor output will be ignored in this state. In many cars (with the exception of some turbocharged models), inputs from the air flow meter are also ignored, as they might otherwise lower engine performance due to the mixture being too rich or too lean, and increase the risk of engine damage due to detonation if the mixture is too lean.